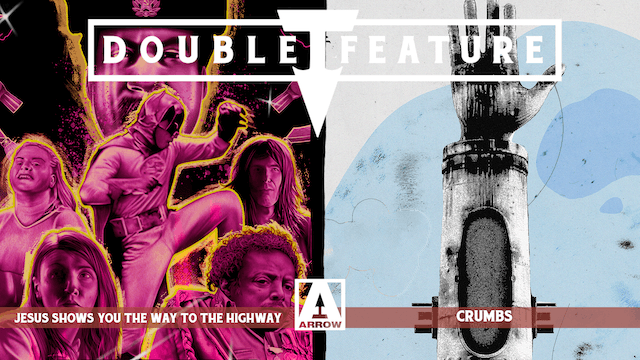 DOUBLE FEATURE - Jesus Shows You The Way To The Highway / Crumbs

A BAN THIS SICK FILTH friendly double-feature with JESUS SHOWS YOU THE WAY TO THE HIGHWAY and CRUMBS!
JESUS SHOWS YOU THE WAY TO THE HIGHWAY. What do you get when you cross Afro-futurism, Cold War paranoia, the dystopian world of Philip K. Dick and 60s exploitation cinema, along with a hefty dose of Lynchian surrealism? The answer: 'Jesus Shows You the Way to the Highway', the second feature by Miguel Llanso ('Crumbs') and one of the most striking and original films you'll see all year. The year is 2035, and Special Agent Gagano (Daniel Tadesse, 'Crumbs') dreams of leaving the CIA to open a business with his wife Malin (Gerda-Annette Allikas). Before he can hand in his resignation, however, a strange cyber virus attacks Psychobook, the CIA's operating system, forcing Gagano to enter cyberspace via virtual reality to combat the threat. Before long, however, the virus starts to reach out into the real world, destabilising the fragile socio-political order for its own ends, and Gagano, trapped in the VR world, must find a way out before it's too late. Featuring encounters with an Irish-accented Joseph Stalin, a kung-fu-fighting Batman, and Jesus Christ himself, to name but a few, 'Jesus Shows You the Way to the Highway' is absurd, audacious and like nothing you've ever experienced before.

CRUMBS. The first feature film by director Miguel Llansó (Jesus Shows You the Way to the Highway), Crumbs is a surreal, romantic, post-apocalyptic adventure set against a backdrop of Afrofuturism - a recurrent theme in Llansó's work. In a dystopian post-apocalyptic world, the various wars that tear our civilization apart have left humanity on the verge of extinction. The wreckage of a rusty spacecraft looming in the sky serves as a stark reminder of those terrible years and living proof of the current decline. Against this hostile backdrop, Candy (Daniel Tadesse Gagano, Jesus Shows You the Way to the Highway) and his beloved Savat (Selam Tesfaye) try to survive, holed up in an abandoned bowling alley. As this long-dormant world returns to life, Candy embarks on a desperate quest to board the spacecraft before it's too late. During his epic journey, he will cross paths with a myriad of colorful characters, each more unusual than the last... Supported by some breathtaking shots of Ethiopian scenery, in a world where mass-produced items are celebrated as rare artifacts and symbols of a nearly forgotten pop generation are glorified, Crumbs is characteristic of the unique and audacious style of director Miguel Llansó and will leave you yearning for more!