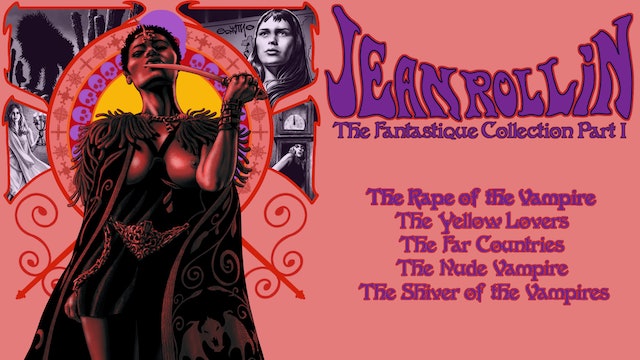 Mostly known for his gorgeous and seductive vampire films, Rollin was a passionate and resourceful filmmaker with a personal and unmistakeable style and a vision that he would do anything to see realised - even if it meant having to direct sex films under a pseudonym on the side.

Full of absolutely unforgettable imagery that will find its way into your dreams; welcome to the mysterious, beautiful and fantastique world of Jean Rollin.

‘Jean Rollin: The Fantastique Collection Part 1’ brings together his first three vampire movies alongside two of his short films. ‘The Rape of the Vampire’ was Rollin’s first feature. Shot in black and white and causing a near-riot upon its first projection during a period of civil unrest in France, it sees four women convinced that they are vampires hunted down and killed by the local townsfolk… until the Queen of the Vampires arrives.

Rollin’s second feature, ‘The Nude Vampire’, is his first in colour as well as the first time he would work with frequent collaborators the twin Castel sisters. Influenced by a pulpy French serial and surrealism, it features sumptuous sets and incredible costuming that will have your eye out if you’re not careful, in a tale of a man drawn into a chilling cult who are experimenting on a young, mute vampire woman.