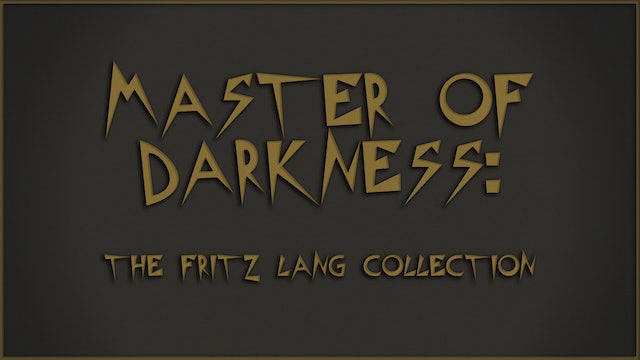 Nicknamed “Master of Darkness” by the British Film Institute for a retrospective in 2000, Fritz Lang was indeed a genius when it came to expressionistic wielding of light and shadow, but he was also a connoisseur of capturing the darkness in his films’ subject matter and in the hearts of the characters that populated them.

ARROW are proud to present five of Fritz Lang’s films from both his German period and his Hollywood career, some well-known and highly influential and some less seen and ripe for reexploration and rediscovery.

Metropolis is perhaps his most famous work and with good reason. A true touchstone in the science fiction genre to this day, the imagery and ideas which Fritz Lang brought to the screen in this timeless story of class warfare and robotics as resurrection still generate an aura felt in sci-fi on and off-screen to this day, as well as the perpetual quest for ever more pioneering visual effects.

Five years earlier, Lang had brought a very different kind of dystopia to the screen. Dr Mabuse The Gambler (Dr. Mabuse, der Spieler) is a jaw-dropping crime thriller set in a nightmarish criminal underworld where Dr. Mabuse and his gang scheme and scam, and utilise disguise and mind control to accumulate money that is becoming worthless as fast as they can lay their hands on it.

Eleven years later he would return to the character with The Testament of Dr Mabuse (Das Testament des Dr. Mabuse). Where The Gambler was commenting on the state of society in Germany after the country’s post-World War One dissolution, The Testament - which sees Mabuse banged up in an asylum and plotting further crimes that are being committed outside - is clearly commenting on Hitler’s rise to power through his cult of personality. So much so that Goebbels had it banned.

1947’s Secret Beyond the Door finds Lang now entrenched in Hollywood and helming this film noir starring frequent collaborator Joan Bennet (Suspiria’s Madame Blanc), who he had already made into a queen of the femme fatales through their previous films, and British acting heavyweight - and a knight, to boot - Michael Redgrave (The Lady Vanishes) in a romantic mystery thriller that crosses the Bluebeard legend with Daphne du Maurier’s Rebecca.

Hangmen Also Die! is also from Lang’s Hollywood era, but here himself and three other German exiles: playwright Bertolt Brecht, composer Hanns Eisler and actor Hans Heinrich von Twardowski, told a “war noir” from the safety of Hollywood that was a fictionalised account of the assassination of the SS’s number two man by the Czech resistance at a time when Czechoslovakia was still occupied by the Nazis.