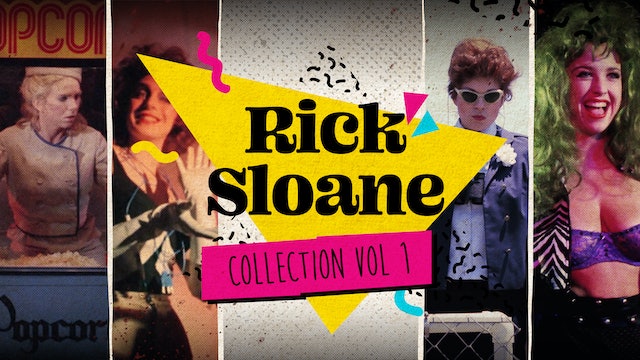 Cult B-movie legend Rick Sloane writes, directs, produces, edits and is the cinematographer on almost all of his films and Volume 1 of the ‘Rick Sloane Collection’ celebrates perhaps some of the best known of Rick’s movies. A fan of exploitation movies from a young age, Rick has continued to stay true to making the kind of films he’s always loved, and that we love on ARROW, and that we are sure you are going to have a blast with too.

‘The Visitants’ sees Sloane take on sci-fi as an alien couple attempt to collar a 1950s teenager who has swiped one of their ray guns in a funny and freaky fishes-out-of-water comedy set on Halloween night, while ‘Blood Theater’ keeps the laughs coming but switches up genres to the slasher! A cinema that’s been shuttered for fifty years reopens one night only for a killer to begin offing the audience one... by... one… ‘Blood Theater’ features an array of unforgettable cinema-centric kills -- fried alive inside a popcorn machine, anyone? -- and stars another cult Queen in the form of Mary Woronov (‘Death Race 2000’, ‘Night of the Comet’).

Last up is ‘Hobgoblins’ a down and very dirty take on ‘Gremlins’ that sees a gaggle of evil little monsters imbued with the power to peek inside your brain, discover your naughtiest, innermost fantasies and then make you live them out TO DEATH causing absolute chaos and trying to rip a group of sex-obsessed friends to shreds.